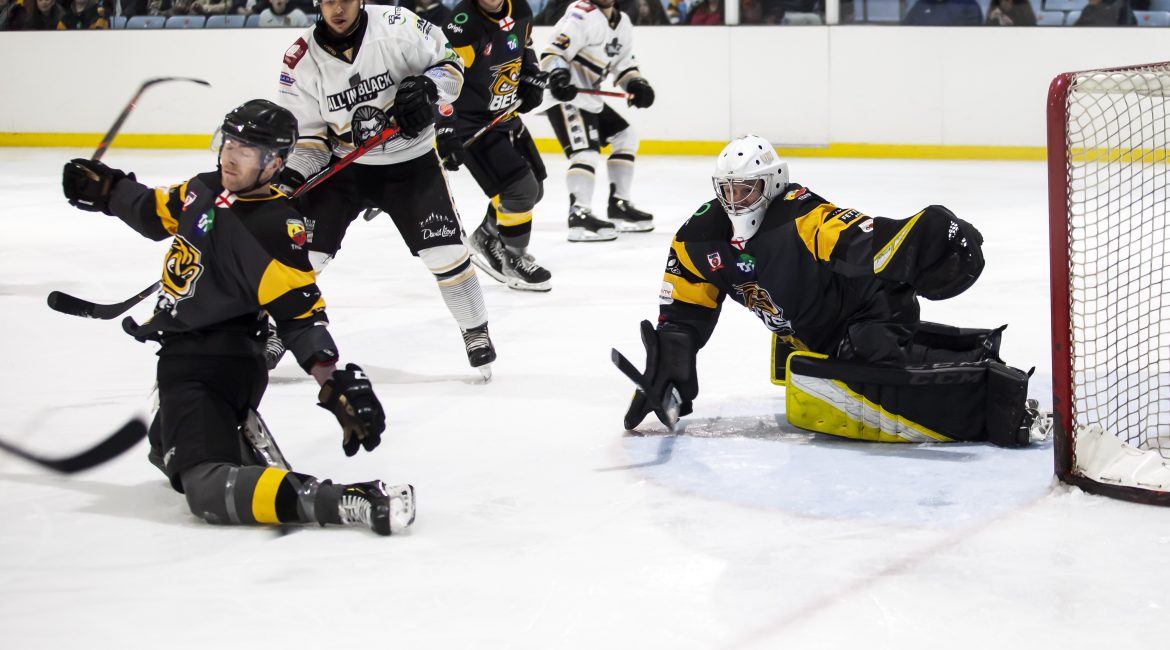 This weekend I had the chance to catch up with Adam Goss to see how he felt the weekend went and to also see how he is feeling going into this weekend’s fixtures which is our double header against the Telford Tigers.

“I thought that we battled hard as a team both nights and I liked how committed we were to the end. On Saturday, we managed to keep a strong offensive team at bay and we’re unlucky to not come away with some points. Sunday, we made a few mistakes in our D zone that cost us in the end and got unlucky not being able to capitalise in the offensive zone. I was pleased with my performance on Saturday as I was able to make timely saves and give us a chance. On Sunday, I was disappointed I didn’t have a greater influence on the game and make big saves.”

FN: “What are some of the things that may need to be improved on for our upcoming fixtures from a goalies perspective as well as a general perspective?”

“It’s no secret that the area we need to improve most this year is our defensive end. It has been an area of focus the past couple of weeks and everyone is beginning to buy into protecting our own end first . We have several talented forwards and scoring goals is not going to be a problem for us in this league. Once we are able to tighten our D zone, and give up fewer grade A scoring chances, we will be more consistent and win more games. We just have to trust in the process and take pride in being a harm team to score against.”

FN: “What are some of the positives you and the team can take out of last weekend?”

“I think we can be proud of the effort we put in this weekend and that we pushed two of the top teams till the end. We are going to take the confidence into practice this week and work hard to get to the level we need to be at to win hockey game’s. We’re in a rough patch at the minute bit we’ve got a good group of guys who will go to battle every night for one another. I believe we’re going to come out of this bilp stronger and it’ll start Saturday.”

FN: “How are last weekend’s experiences going to help us going into this weekend?”

“We know we can score goals as a team after getting 4 on one of the top defences in the league and we know we can shut down offensive teams at times from Saturday. It’s just doing both for 60 minutes.”

FN: “How are you feeling going into the double header against Telford Tigers this weekend?”

“I think it’s a big opportunity for me and the lads to prove ourselves against a league contender. We are a team that loves the challenge of playing against a top team and raise our game to compete. I believe going in as underdogs on Saturday and causing a huge upset is the perfect way for this team to get back on track and go on another winning streak.”

FN: “How has the move from Bracknell to Slough been for you?”

“I miss the atmosphere we had at Bracknell which had been built up over many years. That said, I feel that we’ve been building a good following in Slough and it’s good to see a mix of old and new fans cheering us on. In practical terms Slough is a much smaller ice rink than Bracknell was and I’ve had to adjust my game to accommodate for that. These angles are tighter down low and the end zones are bigger which makes it tougher on me and the D. However, I think we’re all learning to use it to our advantage and that’ll hopefully pay dividends down the line.”

“Bring a brick because we’re building a wall this weekend.”

This Saturday the Bees take on the Tigers at home at Slough Ice Arena, why not take the kids down as they do not have school the next day? And then on Sunday, make the trip down to Telford to take on the Tigers in the second game of the double header.

Hope to see you all there loud and proud on Saturday to cheer on our team the Bees and safe travels to those making the trip to Telford on Sunday.