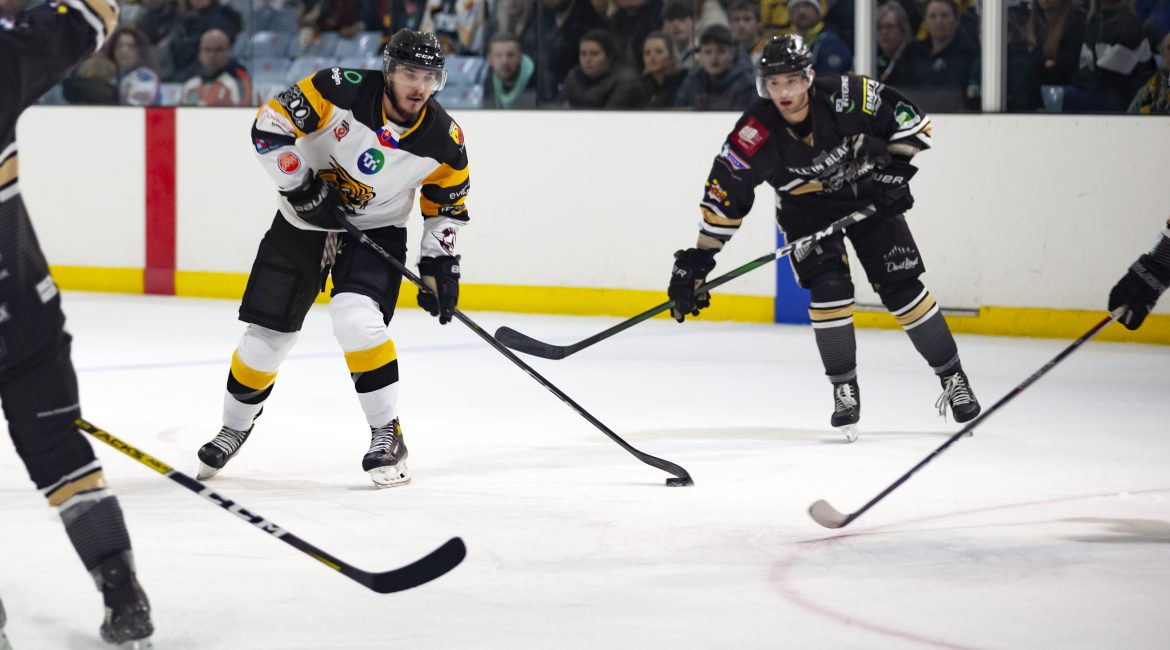 FN: “How do you feel the weekend went for the team as well as yourself?”

“Both us and the Raiders were short benched and had lots of guys missing but we played for important 4 points this weekend. We showed character in both games, on Monday we came from behind in the third and then on Tuesday, we were able to kill two 5 on 3 powerplays and then score a late shorthanded goal to win the game. And for me personally I was happy that I was able to score some goals and help the team win.”

FN: “What was it like having to bring a few new players in for our games against the Raiders?

“Slough Jets guys were brilliant this weekend, they really helped us as we were short. They train with us since the start of the season so we knew what we were getting when they came to play for us and they helped us to have a 4 point bank holiday.”

FN: “What are some of the positives from this week’s games?”

“The main positive is that we didn’t give up and we battled hard till the last horn in both games. Also, especially in the second game we had unbelievable goaltending in Gossy and from the defensive point of view I think it was our best game.”

FN: “How did it feel to get those 4 points for yourself as well as the rest of the team?”

“It is always great to have a 4 point weekend especially now when we are approaching midpoint of the season we need to start taking points every weekend and start moving up in the table.”

FN: “How are these 2 past games against the Raiders going to boost our performance going into this weekend’s fixtures against Swindon and Basingstoke?”

“These games will give us confidence going forward and that is something that we were missing in the beginning of the season where we left some points on the table and it is important for us now to start racking up points regularly. We are 2 points behind Basingstoke and we can catch them this weekend so we know what we need to do to make that happen.”

FN: “How are you personally feeling going into this weekend?”

“I personally feel good going into this weekend. I think the past weekend was probably the best I felt on the ice this entire season, so I want to bring that into this coming weekend as well.”

FN: “From a Player Coaches perspective, How do you feel we have performed so far this season?“

“I think we left a lot of points on the table, we were in all of the games but we were just unable to score points, but I think this weekend can help us in turning this around and start winning those close games instead of coming up short.”

FN: “What are some of the things we need to improve on as we are getting closer to the end of the season and playoffs?”

FN: “How has it been for you coming into this season and taking on the role of Player Assistant Coach?”

“Coming into this season I was just excited to come back to UK and have a proper season again. I was excited that I got the opportunity to become a player assistant coach and basically I just want to bring feedback to Doug about what it feels like on the ice and what can we change to become more successful in any given game.”

“We appreciate the Beearmy supporting us home and away. We hope that we will bring a lot of joy to you guys in the remainder of the season. Hopefully everyone will stay safe and healthy in these weird times and we will see you this weekend in the two derby games!”

The Bees have two derby games this weekend with the Bees taking the trip to Swindon on Saturday then on Sunday take on the Basingstoke Bison at the Slough Ice Arena. Why not take the trip down to the Slough Ice Arena on Sunday for a game which we all know will be a game you do not want to miss! While you are there you can also see Dominik Gabaj in action.

Safe travels to all those also taking the trip up to Swindon on Saturday. I hope to see you all there loud and proud in Slough, and also a Happy New Year to all of you and I hope you all have a safe New Year!