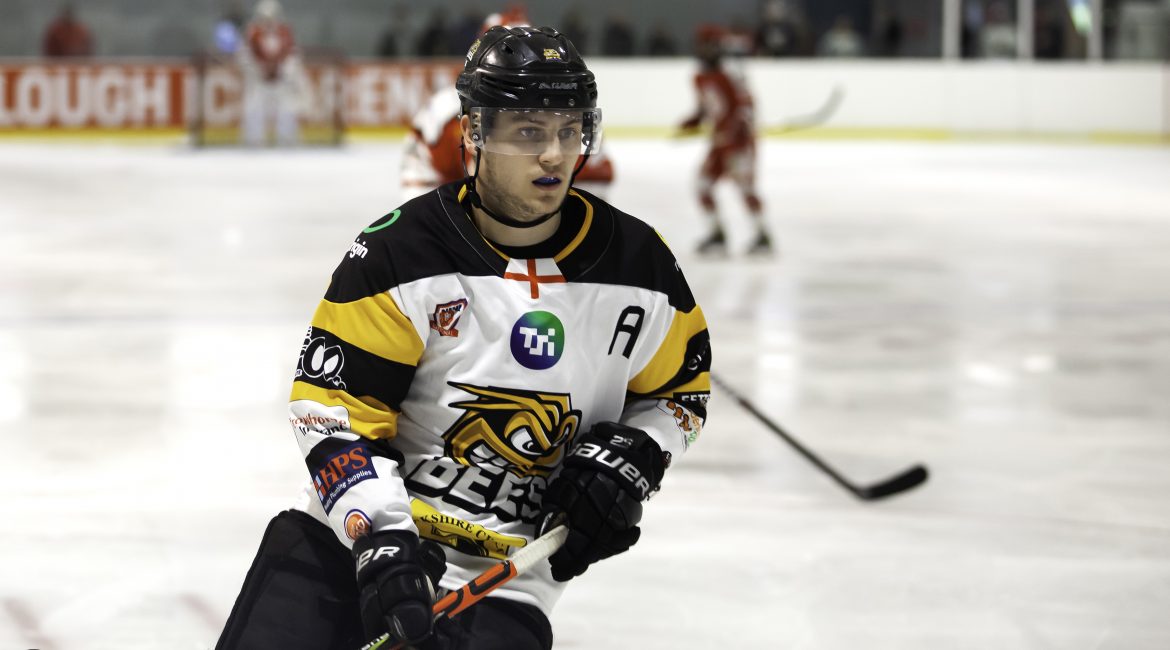 This week I had the chance to speak to Bees Defensemen Harvey Stead about how he felt the weekend went and ending 2021 on a 4 point weekend as well as his favourite moment since he has been at the Bees.

FN: “How do you feel this weekend went for the team and you personally?”

“For me personally it was a good weekend contributing in both games. As a team it was a mixed weekend for us. A good road win Saturday and disappointing to lose at home to Basingstoke Sunday. We had a lot of chances Sunday that we just didn’t take, me included. But it’s a positive we got these chances and on another day the score could have looked the other way around.”

FN: “What do you think are some of the things that may need to be improved on for our upcoming fixtures against the Telford Tigers?”

“Bearing down a little more on the chances we got and being tighter defensively.”

FN: “What are some of the positives you can take out of the weekend?”

“That even with 4 important players out we can still step up and compete with all teams in the league.”

“A little sore after hurting my shoulder Saturday but nothing Bernie can’t fix during the week.”

“The perfect way to end the year. Both teams were short but we can only play what’s in front of us, even better ruining the 6-0 record the Raiders should apparently have against us.”

FN: “After being at the Bees for so long, how did it feel to get the role of Assistant Captain in the Spring Cup as well as this season?”

“It was pretty special. It doesn’t change you much but does come with a little extra responsibility both on and off the ice. Gazza would be disappointed if I don’t mention it’s alternate not assistant, I got you Jimmer.”

“There’s more of a story behind it but after Jan Bendik was coming back to the Bees I had to give up 17 (no Rolex Janny?) and 65 was the first number which came to mind, or eyesight, when I had to choose.”

FN: “What has made you stay at the Bees for so long?”

“The Bees is my hometown club. It’s a little different now being in Slough but Bracknell is where I played all my junior hockey and all but one season of senior.  It’s never been a hard decision to come back and play with guys I’ve grown up with.”

FN: “What was the move like from Bracknell to Slough for you?”

“It’s been difficult to be honest. There’s a lot of memories I have from the John Nike, a lot of things I miss which you can’t replicate at Slough, it had character and felt like my second home. From playing juniors there, working there whilst at university and also playing for the Bees I think I spent more hours there than anywhere else from the ages of 10-21.We’re lucky Slough is so close and a real nice rink. I’m sure in time it will begin to feel more like home for both the players and fans.”

FN: “What is your favourite moment from your time at the Bees so far?”

“There’s been a few. I’d say making my debut and playing with and against players I grew up watching like Lukas Smital, Danny Meyers and showing his age, Gazza are two top ones. Also playing with so many players from the junior sides, and friends, in the Bees. When you look back at how many of us came directly from Bracknell juniors you could build a pretty good team.

But I can’t say anything tops playing the Boxing Day games against Guildford. It was always a packed rink and any game against them, juniors or seniors, always had that extra meaning to it. Anyone but Guildford.”

FN: “Message for the Beearmy?”

“Thank you for the continued support. If you’ve not been over to Slough since the move, come down I’m sure you won’t be disappointed.”

Why not come down to the Slough Ice Arena this Saturday when the Bees take on the Telford Tigers and while you’re there you can also see Harvey Stead in action as well as the rest of the team, beelive me you will not want to miss the game this Saturday!

Hope to see you all there loud and proud on Saturday Beearmy and safe travels to those who are making the journey on Sunday to Telford.