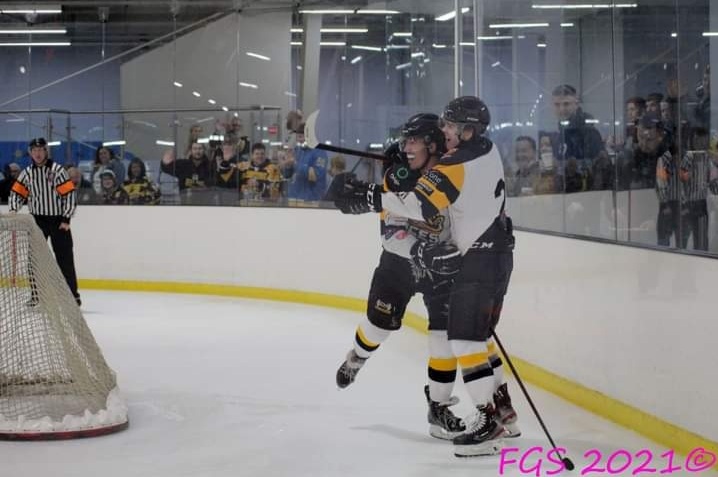 This week I had the chance to speak to Forward Skate Skalde after he iced for the team against the MK Lightning on Saturday. I had the opportunity to ask him how he felt the weekend went for the team as well as himself and about his experiences coming over to the UK to play.

“It was disappointing going 0-2 but the team played hard throughout both games and it could of definitely went in our favour and we need to build off our strong effort into the Leeds game.  Personally I’m happy with my performance but definitely can improve in many areas of my game.”

FN: “What are some of the things that may need to be improved on for our upcoming fixtures?”

“In the upcoming games I want to keep improving on the defensive side of the puck and be a two way threat for this team.”

FN: “How are you feeling going into this weekend’s fixtures against Leeds and Swindon?”

“I’m looking forward to the challenge of playing two of the top teams in the league and trying to complete a 4 point weekend.”

FN: “How are the previous weekend’s experiences going to help improve our game play going into the weekend?”

“We had a very strong showing against Leeds last time at home and we want to play the way we did in that game, scoring early and often and being hungry on the defensive side of the puck while improving on our game vs Swindon and showing we have more to bring to the table.”

FN: “How has it felt coming to play over in the UK for the first time in your career?”

“It’s definitely been a hard adjustment to the style of play and the bigger ice rink coming here for the first time but I just want to keep working with Shep and my teammates to adjust and learn the pro style game.”

FN: “How has it been playing with the Bees so far and getting to know everyone?”

“It’s been really fun, the Bees is a great organization and the fans have been very supportive and loud at the games. I’ve really gotten along well with my teammates and I’m excited to see this team grow throughout the year.”

“Thank you to the fans for the support they’ve shown me and the rest of the team this season.”

Why not take a trip down to the Slough Ice Arena on Sunday to see the Bees in action against Swindon, our local derby?

Safe travels to all those making the trip to Leeds on Saturday and hope to see you all loud and proud at home on Sunday.