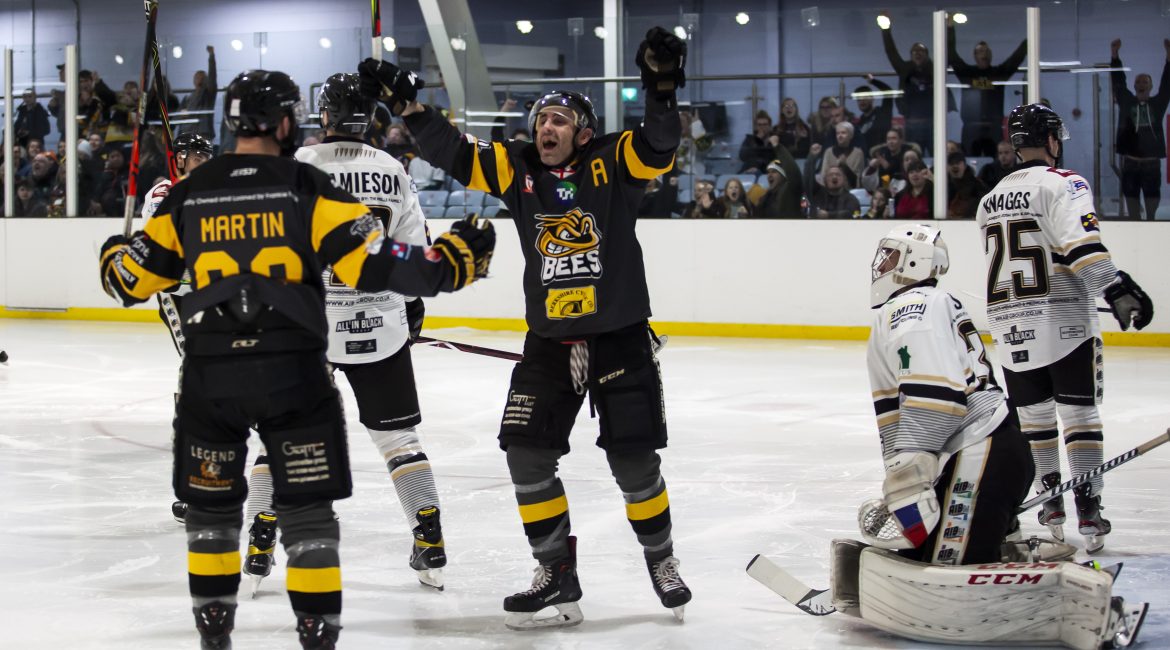 This weekend after our game against the Leeds Knights I had the chance to talk to Bees legend James Galazzi about how he felt the game went on Sunday and how he’s feeling going into our upcoming fixtures against the Swindon Wildcats and Peterborough Phantoms as well as a bit about his past with the Bees.

FN: ”How do you feel the Leeds game went for you personally and the team?”

“The Leeds game was a bit disappointing, because we did a lot of things right and came pretty close to putting in a good performance. I think as a team, we started pretty well, stuck to the game plan and got some success. I was pretty happy with my contribution to the first goal. Then from the second period we stopped doing what had made us successful and picked up a few penalties.”

FN: “What are some of the things that maybe need to be worked on for the upcoming fixtures?”

“As a team, we need to learn from our mistakes and keep it simple.”

FN: “How are the experiences from the Leeds game going to help us on the weekend?”

“We’re pretty confident that we’re competitive against anyone, so we’ll be going into this weekend with that mindset and looking for 4 points.”

FN: “How has the move from Bracknell to Slough been for you personally?”

“It’s definitely been a bit of a transition. I’d become used to the home comforts of the hive and bigger ice size, so a bit of a shock but I’ve gotten used to it now.”

FN: “How has the game changed generally since you have been at the Bees?”

“The game has changed a lot since the early days of the EPL to the NIHL. Obviously the import numbers have dropped but also the standard of Brits. There are much younger players these days so the game is not as physical.”

FN: “ What has made you stay with the Bees for all these years?”

“ No one reason really. In the early days obviously I was getting lots of opportunities, and then the club showed me lots of loyalty which I wanted to repay. If the Bees were happy to have me then I was happy to play here. The club is a great place to play, from the ownership, through off ice staff to the fans.”

FN: “If you had to pick one moment which is your favourite whilst you’ve been at the Bees, what would it be?”

“Wow, now that is a tough one. Obviously we’ve not been too successful in terms of silverware in recent years so it’s going to have to be a memorable win. I can’t remember the year for sure, but I think around 2012, we were in Guildford losing 6-3 going into the third period and we ended up winning. That was a good night.”

FN: “Is there a reason you have used the number 10 for all these years?”

“I’d like to thank the fans for their continued support. Right from year 1 through some tough times right the way through to the move to Slough. Having that encouragement always makes it worthwhile.”

Why not come down and while you’re here also see Bees legend James Galazzi in action?

Let’s make some noise at the Swindon away game on Saturday if you are making the trip to Swindon safe travels as always and hope to see you all there loud and proud Beearmy on Sunday!