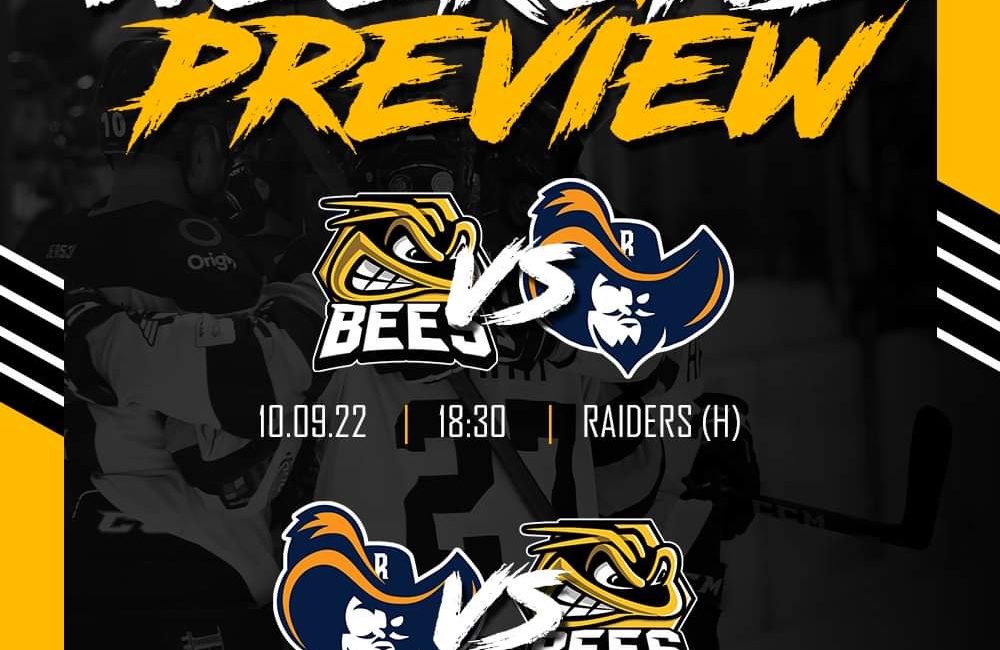 The TSI World Bees face the Raiders IHC for a doubleheader Everyone Active Cup weekend.

Over the off-season period the Raiders, as well as the Bees, made adjustments to their roster with the signing of former Bison player Elliott Dewey. Ethan Reid who iced for Chelmsford last season and Mikey Power. Power is no stranger to Bees fans as he iced for the Bees at the start of last season but then moved to MK Lightning mid-season. Blahoslav Novák, who did not ice last season, joins the Raiders lineup. Raiders also made some last-minute announcements with Adam Laishrim stepping into the lineup as injury cover as well as Harvey Briggs and Adam Erskine who are on 2-way contacts.

The Bees go into this weekend without Adam Rosbottom. Alan Lack and Will Stead are also forced to sit due to supplemental discipline decisions after last weekend. Lack will return to

the ice Sunday. Stead will sit the weekend.

From last season’s meetings between the two sides, the Raiders won 1 game out of 6 meetings. Jake Sylvester and Aaron Connelly are the most influential players for the Raiders against the Bees. Jake scored 25 goals and Aaron scored 22. Whereas with 5 wins for the Bees, Dominik Gabaj and Juha Lindgren were our top point scorers. Dominik scored 35 goals against the Raiders and Juha scored 22 goals.

On power plays the Bees will have to watch out for Jake Sylvester. He was the Raiders’ top point scorer on the power play with 7 goals and 6 assists. However, for the Bees, Dominik Gabaj will be one to watch with his 9 goals and 13 assists on the power play. Ethan James was a key part of the Raiders squad after some amazing performances in goal last season, shutting down some key opportunities for the Bees. Ethan had a save percentage of .891 in comparison to Adam Goss’ which was .894. The penalty kills for the Raiders are very tight and extremely hard to get past. The Bees saw last season in many power plays, the Raiders’ defence came together to prevent any player from taking advantage.

This weekend gives the Bees the chance to hold onto the Everyone Active Cup for another season.

The first leg of the doubleheader is at Slough Ice Arena on Saturday. Do not miss the chance to watch the Bees defend the Cup and also come together to pay our respects, as a community, to Her Majesty The Queen.

Check out the website to get tickets for the game in Slough. See you there Bee Army.