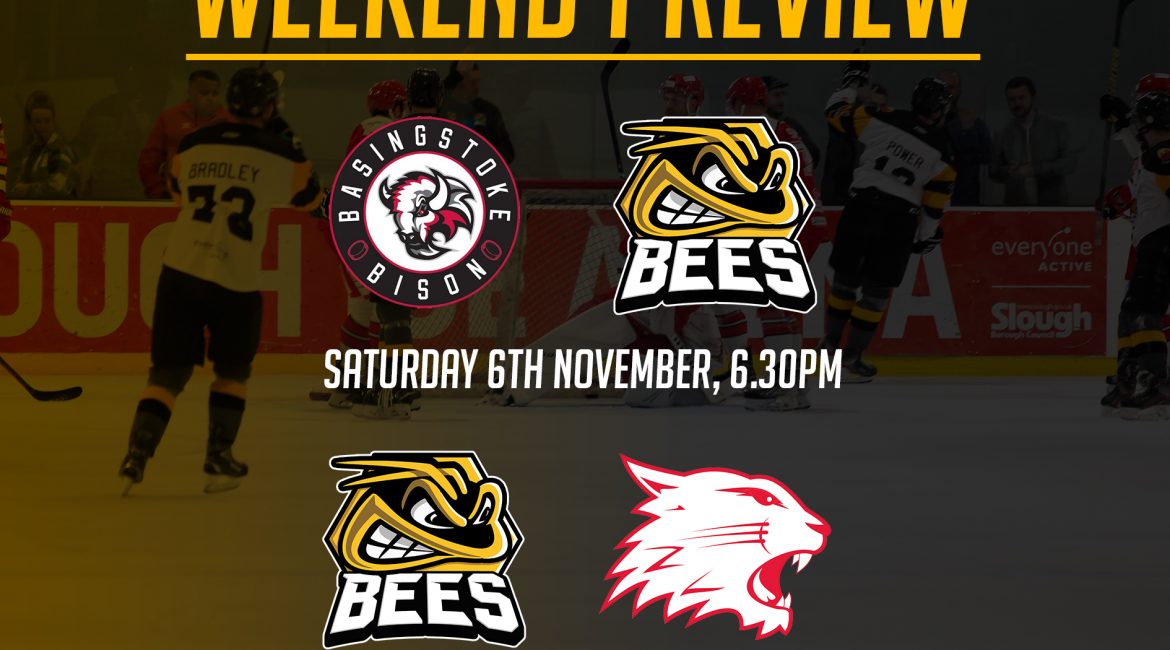 This weekend for the TSI World Bees sees them lineup against local opponents in a weekend of derbies. On Saturday night the short journey ends in Hampshire for a night with the Basingstoke Bison while Sunday’s home game sees the Swindon Wildcats journey to Slough.

It’s been a mixed start to the season for Saturday’s opponents who currently find themselves with a win and an overtime win out of their first six league games. Last weekend Bison took on Sheffield home and away with a narrow 3-4 home loss followed by a 6-3 road loss.

Adam Harding leads the club’s scoring with 5+5 from 6 games but the Bison find themselves going in to the weekend starting in eighth place.

Sunday’s opponents have had a 3-2 start to the season which sees them start the weekend in third place. The Wildcats played just once last weekend running out 7-4 victors over Milton Keynes Lightning.

Aaron Nell leads the Wildcats’ scoring with 4+6 from 5 games with the ever prolific Tomasz Malasinski just behind on 8 points.

Christian Mohr scored his first goals last weekend for the Bees. The 18 year old forward is on a two way contract with the Slough Jets as the partnership between the two teams continues to grow. On Friday he stepped up with a beautiful goal as well as a pin point accurate strike on Sunday.

Dominik Gabaj heads the points charts with 9 points while Ed Bradley, Bayley Harewood and Mikey Power are all tied second with 6 points.

Last weekend also saw a return to the lineup of Joe Baird. It took no convincing at all to get Joe to again pull on Bees colours with Harvey Stead out indefinitely. As the club brings on a number of young players having Joe Baird’s experience in the lineup and the dressing room is a great learning experience for the younger players.

It’s been some time since the Bees iced their full lineup but with Skate Skalde and Joe Baird now signed the Bees have a good nucleus resulting in the first four point weekend of the season last weekend.

Head Coach Doug Sheppard had this to say; “Things are going well and we’re coming off first four point weekend this season. I like the fact that we’re getting scoring spread throughout lineup and we’re getting good goaltending also. I think we can still improve but we must stayed grounded, stay focussed and take it a game at a time and keep this run going.

Harvey is progressing nicely following his injury but he is still going to be questionable in the short term; it will be the doctor’s decision when as to when he returns. Niklas is also questionable but is going to try in training tomorrow and we’ll know closer to the weekend whether we’ll have him back in the lineup.

We’re going into the weekend in good form and we want to stay focussed. There are no easy weekends and we start with weekend against of our big rivals in Basingstoke. Our work rate has been good, we need to focus on not only maintaining that this week but also putting in even effort this weekend to keep things going against two tough local rivals.”

Bees play in Basingstoke on Saturday at 6.30pm before Sunday’s home game against Swindon at 5pm.