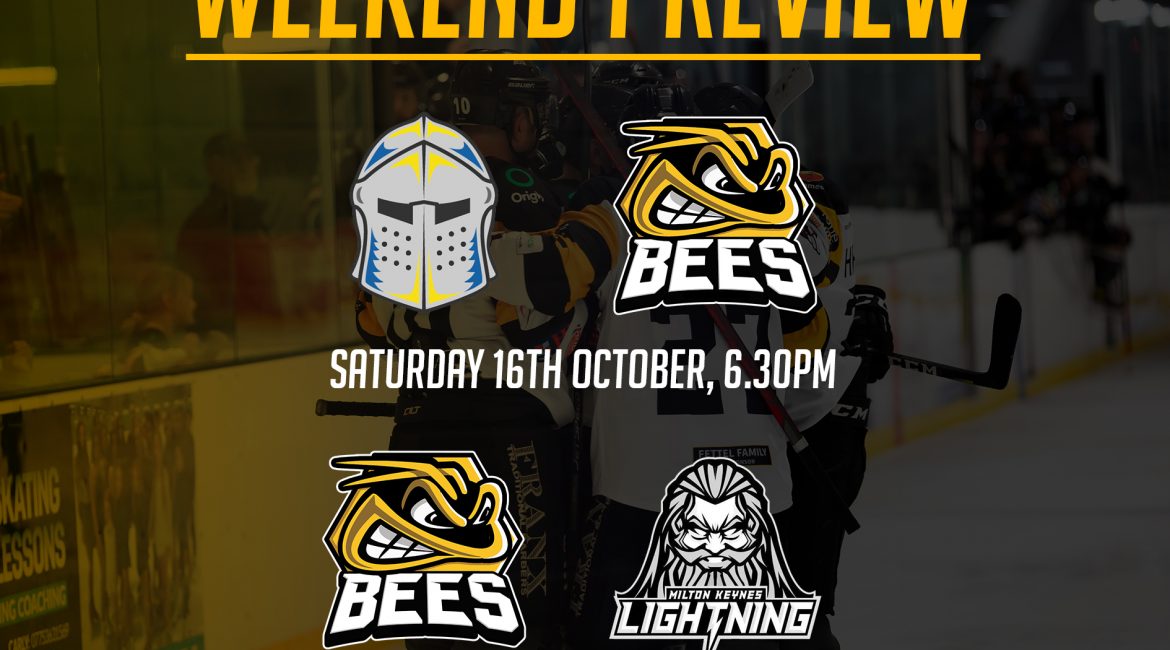 This weekend is the start of the league campaign as the NIHL National League kicks off. The TSI World Bees start their campaign on the road on Saturday playing the Leeds Knights before a home game the following day against the Milton Keynes Lightning.

Both are teams the Bees have faced before, the Knights triumphing in the autumn cup match up while the Bees were the victors in their last battle with the Lightning. The weekend’s opponents enjoyed vastly different successes in the Autumn Cup with the Chiefs finishing top and the Lightning finishing bottom.

Last weekend the Bees gave two very impressive performances while short-benched. Saturday night the Bees went down by a goal in Telford in a seven goal clash while running out 6-4 victors the following night in the hottest local derby against the Bison.

Bees have a long journey ahead on Saturday as they travel to Elland Road. Going into the weekend Harvey Stead is a definite scratch as he misses his second weekend injured with Josh Martin and Juha Lindgren both being monitored and assessed ahead of the weekend.

Last weekend Bayley Harewood spent Saturday with the Cardiff Devils before returning on Sunday and completing a hat-trick to help secure the win over the Bison. Midweek Bayley was back with the Devils for their Champions League game and will rejoin us for this weekend’s games.

Last Saturday we got to blood some young talent in the line up with Bees coach Doug Sheppard being particularly impressed with Jacob White-say. Jacob is a sixteen year old player from Slough Jets who made his debut for the Bees last Saturday in a tough game in Telford.

The strengthening partnership between the Jets and Bees will continue to benefit both clubs as the season goes on with promising Jets players getting opportunities to train with and play for the Bees in the National League helping their development.

Both of this weekend’s opponents suffered defeats in their last Autumn Cup games as Leeds went down 4-5 to Peterborough Phantoms while Sheffield Steeldogs rampaged over Milton Keynes Lightning for an 8-1 win.

Head Coach Doug Sheppard spoke ahead of the weekend; “We’re finished with the cup now and I’m pleased with the hockey we’ve played. We’ve picked up some victories and some moral victories as well while playing mainly short benched but the moral victories no longer count and it’s time for us to be picking up four points each weekend.

“Leeds finished top of the Autumn Cup and will be a tough test on Saturday but the cup has proven that every team is beatable. On Sunday we face Milton Keynes who are coming in off a tough loss. We can’t underestimate them and when we faced them in the cup they were without Liam Stewart who’s a big figure in their team.

“We continue to monitor our injuries. The list is longer than we’d like but we’re hopeful that all are close to returning so we’ll continue to monitor their progress and make decisions closer to the weekend’s games. We’re also fortunate enough to be able to benefit from some of the Jets’ players again this weekend with them having the weekend off as well.”

Bees play in Leeds on Saturday night in a 6.30pm face-off and play at home on Sunday at 5.00pm against the Milton Keynes Lightning.