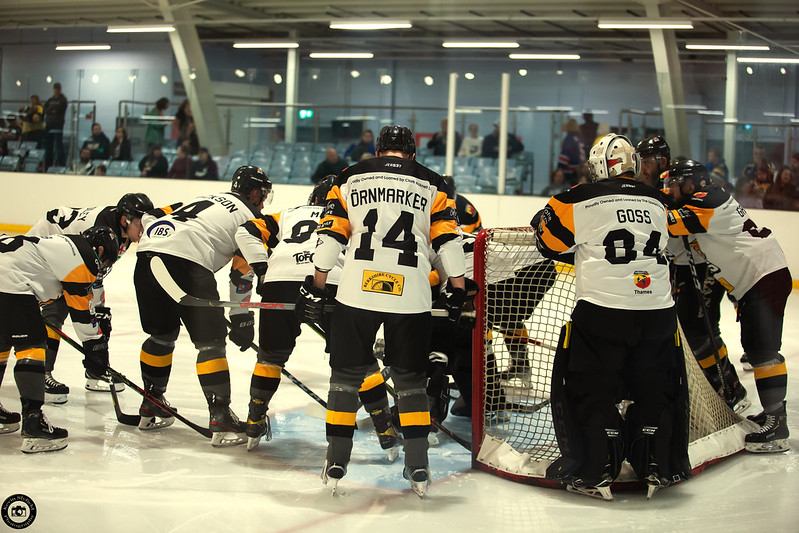 After two successful weekends of pre-season it’s time for the TSI World Bees to get their season underway with a visit to Leeds and the return of Swindon to Slough when we skate out on home ice on Sunday.

The Leeds Chiefs were taken over during the period between 2019/20 and 2021/22 by Wildcats owner Steve Nell and renamed to be the Leeds Knights. The Knights play out of Planet Ice, Leeds and contain a number of familiar names but interestingly the Knights have an entirely British trained roster.

Swindon Wildcats have had a tough pre-season through roster unavailability including back to back defeats to the Bees last weekend but Aaron Nell traditionally puts together a strong team more than capable of contending for all competitions and as such as won’t be taking them for granted this Sunday.

Bees Head Coach Doug Sheppard is a happy man at the end of pre-season. Bees drew their opening game against Raiders before going on to wins in Romford, Swindon and Slough and ending pre-season with the Everyone Active Cup and a won 3, drawn 1 record.

Last weekend non EIHA trained player Dominic Gabaj returned to the lineup and immediately picked up where he left off with 1+2 on Saturday and 2+1 on Sunday. Fellow non-EIHA trained player Niklas Örnmarker also added another goal to his tally completing a successful start for the Bees imports.

Mikey Power continues to look impressive in the black, white and gold, having scored in every game so far this season. He is one of the new players who’ve slotted in well so far this year.

Bees goaltending combo Adam Goss and Curtis Warburton both got ice time through pre-season and players like James Galazzi and Josh Kelly showed they’re prepared to play the physical game when needed.

Doug Sheppard looked ahead to the start of the competitive season; “We were all pleased to be back on the ice again. It’s been a difficult time for all of us. Hopefully hockey nights will raise everyone’s spirits. One young man, Mikey Power, had come to us on a trial. After strong performances, we were happy to invite him to join the team. Bayley Harewood is on a two-way contract with us and Cardiff Devils. We will always support young players anxious to develop their careers so it was good to hear how well he performed in the Elite League last weekend.

“I’m delighted to have Dominik Gabaj to help with coaching in addition to his playing role. We know we have a tough weekend ahead of us, travelling up to Leeds on Saturday and facing a strengthened Swindon Wildcats team on Sunday. It might not be another goalfest, but they’re sure to be exciting games.

Bees play in Leeds in a 6.30pm face-off on Saturday and take on Swindon at home in Slough on Sunday is a 5.00pm face-off.