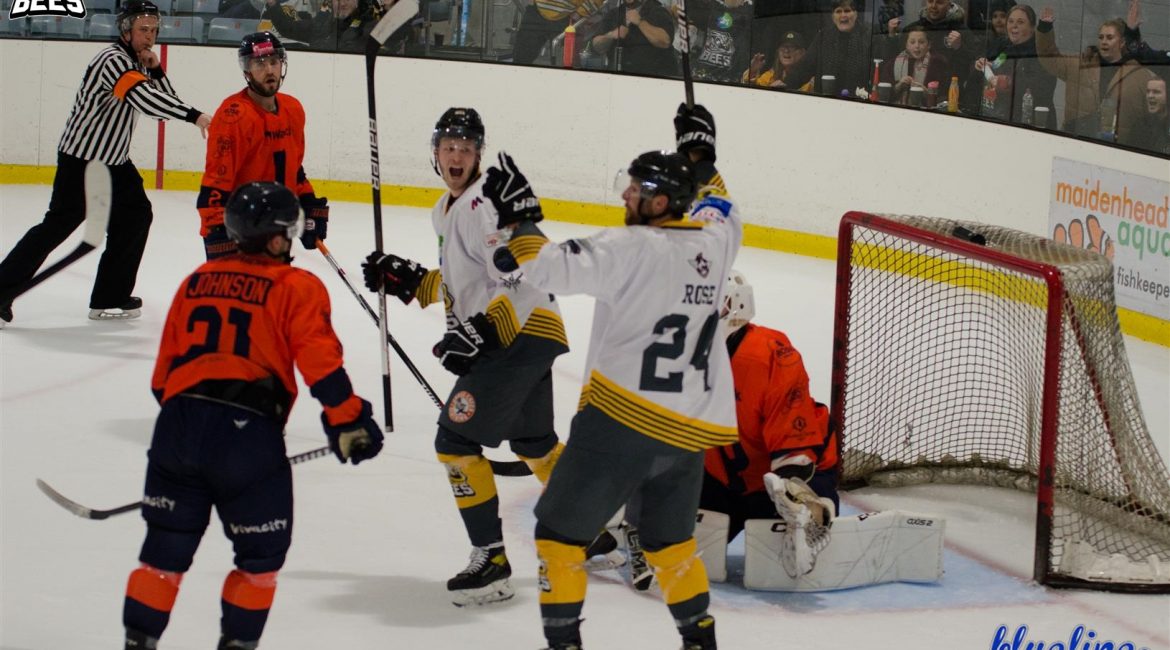 On Saturday the TSI World Bees welcomed the Peterborough Phantoms into the Slough Ice Arena for the Bees home fixture of the weekend.

Both teams came out and straight away Phantoms wanted to test Matt Smital but was shut down by some amazing saves by Matt to start the game. Some more chances went in favour of the Bees then Bees found themselves with a power play chances as Tom Norton for the Phantoms received a 2 minute Holding penalty leading to Dan Rose taking advantage and getting to the back of the Phantoms net giving the Bees a 1 goal lead with assists being awarded to Stuart Mogg and Daniel Bradley. Close chances for Duncan Speirs for Peterborough but these chances were shut down by the Bees’ defensemen and Bees regained possession then took the puck down to Marr on the other side of the ice to test him. Luckily Johnson managed to equalise the game at 1-1 for the Phantoms with assists awarded to Billy Thorpe and Callum Buglass but Bees react to this by Brendan Walkom creating more chances for the Bees to take the lead again. Towards the end of the first period Will Stead and Jasper Foster exchange words that result in Will receiving a 2+2 minute Roughing Penalty and Jasper Foster received 2 minutes for Slashing, which gave Phantoms a powerplay chance.

Phantoms started the second period on the power play however the Bees came out of the changing room attacking the Phantoms net for chances to retake the lead and chances were coming from Brendan Walkom and Juha Lindgren. Duncan Speirs helps the Phantoms take the lead for the first in the game with assists awarded to Glenn Billing and Ales Padelek then again not long after Austin Mitchell-King extends the Peterborough Phantoms lead to a 2 goal lead with assists going to Ralfs Circencis and Will Weldon. After Will Weldons contribution towards the Phantoms goal, Will and JJ Pitchley also exchanged words but this time the Bees came out with a 5 on 4 powerplay chance. JJ Pitchley received 5 minutes for Fighting then Will Weldon received 2 minutes for Instigator and a further 5 minutes for Fighting. Close chances for Bees to begin to close the score gap on the power play but nothing came from advantage but Dan Rose got his second goal of the night to make the game 2-3 with an assist being awarded to Juha Lindgren to see to the end of the period.

Phantoms do not have the ideal start to the third period as Glenn Billing found himself with a 2 minutes Boarding Penalty giving the Bees a powerplay chance straight away, however nothing came from this powerplay chance. There was a chance for Phantoms with Matt Smital getting the initial save but the puck starts to go through Matts legs luckily Harvey Stead was there to stop the puck before it made it over the line. Will Stead with a chance to equalise the game but could not manage to get past Jordan Marr. Austin Mitchell-King extended the Phantoms lead even further with assists awarded to Scott Robson and Ralfs Circencis. The Bees reacted to the Phantoms goal and tried to create more chances and apply pressure onto Phantoms goalie and the defence but Will Stead got Goal 3 for the Bees with an assist that went to Scott Spearing. With 1 minute 20 seconds left of the period the Bees called a timeout and pulled Matt Smital to give the Bees a chance at equalising but only more chances were created and it even got as close as Brendan Walkom hitting the post.

On Sunday TSI World Bees took the trip up to Telford to face the Telford Tigers for their away fixture of the weekend. The Bees were without James Galazzi, Scott Spearing, Adam Rosbottom and Head Coach Dominik Gabaj, who has now served 2 games of his suspension.

Both teams had a strong start and Bees straight away started making chances and very early on in the game at 01:57 Will Stead helped the Bees take an early lead with an assist going to Alan Lack, giving the Bees a 1 goal lead. Bees continued to apply pressure onto the Tigers however Telford were doing the same to the Bees and having some good chances that were shut down by Adam Goss. Vladimir Luka received a 2 minute minor penalty for Hooking at 07:57 giving the Bees their first power play chance of the night and from it we saw some good chances for the Bees to extend their lead but nothing came from the power play. Charlie Webb reacted to the Bees early success with a goal Timed at 14:21 that was unassisted leaving the score at 1-1. Corey Goodison found himself with a 2 minute minor Tripping Penalty Timed at 19:26 that gave the Bees another power play chance that Brendan Walkom took advantage of and scored a powerplay goal Timed at 19:40 with assists being awarded to Harvey Stead and Juha Lindgren. This period ended with Adam Goss facing 13 shots in that period and Brad Day faced a total of 10 shots.

Bees went into the second period not getting the ideal start as at 20:18, Dan Rose faced a 2 minute minor Tripping Penalty that gave the Tigers their first power play chance of the night but did not lead to any Tigers goals. Sam Watkins helps the Tigers equalise early on in the second at 23:45 with assists awarded to Daniel Rose and Finley Howells leaving the score standing at 2-2. Then not long after the goal at 25:52 Vladimir Luka also got to the back of the Bees net with an assist going to Nick Oliver. Alan Lack received a 2 minute minor penalty for Cross-Checking timed at 30:20 giving the Tigers another chance to extend their 1 goal lead but on this power play the Tigers were shut down by Adam Goss. Instead Lewis English managed to get past Brad Day and into the Tigers goal and equalises the game with an assist that went to Will Stead. But at 38:27 Alan Lack received a 2 minute minor Hooking penalty that went over into the start of the third period. Adam Goss faced a total of 18 shots in the second period while Brad Day faced 7 shots in total during the second period.

The Bees and Tigers both had a similar start to the final period with both teams picking up penalties early on. Tyton Cathcart received a 2 minute minor Hooking penalty timed at 42:05 but then Sam Watkins received a 2 minute minor for Roughing as well as Alan Lack receiving a 2 minute minor penalty for Holding. Once everyone returned back to full strength Brendan Walkom gave the Bees the lead in the game at 45:10 with an assist being awarded to Will Stead. Sam Watkins received a 2 minute minor Hooking penalty timed at 49:04 and not long after Alan Lack received a 2 minute minor penalty for Slashing timed at 49:59. While the game was on a 4 on 4 chances as both teams had penalties, Telford took advantage of Bees being without one of their players and Jason Silverthorn equalised the game at 50:36 with an assist going to Finley Howells. However Jason Silverthorn received a 5 minutes plus game for Check To The Head leaving the Bees on a power play chance. Ryan Webb took full advantage of this and secured the Bees the win at 53:43 with assists being awarded to Adam Goss and Dan Rose and that saw the Bees secure the away win as well as a 2 point weekend.

THIS WEEKEND we welcome the Basingstoke Bison to the Slough Ice Arena as we hold our Annual Teddy Bear Toss.

When the TSI World Bees score their first goal on Sunday (or at the end of the 1st Period), the fans in the rink will be invited to ‘Air The Bear’ onto the ice. If your joining us on the Live Stream, you’ll have the option to purchase a Virtual Teddy when you purchase your Live Stream Ticket. 100% of your £5 along with all the Teddies will be donated to the Alexander Devine

Tickets for both the Arena & our Live Stream are available below.