Like clubs up and down the country, there was a great sense of relief at the TSI World Bees Ice Hockey Club as the puck dropped for the opening pre-season game following a long layoff. Pre-season opponents for the opening weekend were the Raiders.

The opening goal went to the visitors with Sean Barry netting at 7.03 but at 7.41 Niklas Örnmarker converted a powerplay to level the score. Bees took the lead at 12.20 through Mikey Power but the first period ended with a Raiders lead thanks to a powerplay goal from Eric Piatak at 15.26 and an even-strength strike from Lukas Sladhovsky at 16.00.

Raiders doubled up their lead at 22.12 through Rio Grinnell-Park but a strong comeback started at 32.56 with Örnmarker’s second followed by Josh Smith finding the back of the net at 38.43 ending the period 4-4. 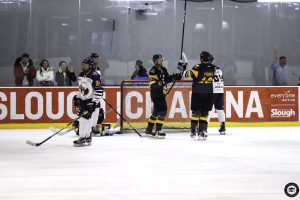 Örnmarker completed his hat-trick at 42.45 but parity was restored through Sladkovsy’s second of the night at 52.27. A Tommy Hugget goal put the visitors back ahead at 54.04 before Josh Kelly levelled the game at 55.43 meaning the second leg would start at 6-6 on aggregate.

Starting from 6-6, Bees lept into the lead just seven seconds into the game thanks to an unassisted Mikey Power goal but Aaron Connolly levelled on the powerplay at 7.57. Harvey Stead scored for the Bees at 10.47 and was followed 6.10 later by Josh Smith to end the first period 1-3.

It was the home team who enjoyed the sharp start to the second period with Rio Grinnell-Park netting 1.26 in but Garry Simpson soon restored the full lead with the game-winning goal at 25.15.

Bees extended their lead with a shorthanded goal at 52.23 from Will Stead before Ollie Baldock pulled a goal back at 55.49. With no further scoring the Bees two goal win on the night gave them the Everyone Active Cup with an 11-9 win on aggregate.

Bees return to action on Saturday at the Link Centre against Swindon Wildcats before welcoming the same team to Slough for a 5pm Sunday face-off.

Tickets are just £10 for Sunday’s game and can be bought in advance via http://dev.beesicehockey.com/index.php/event/bees-vs-wildcats-7/