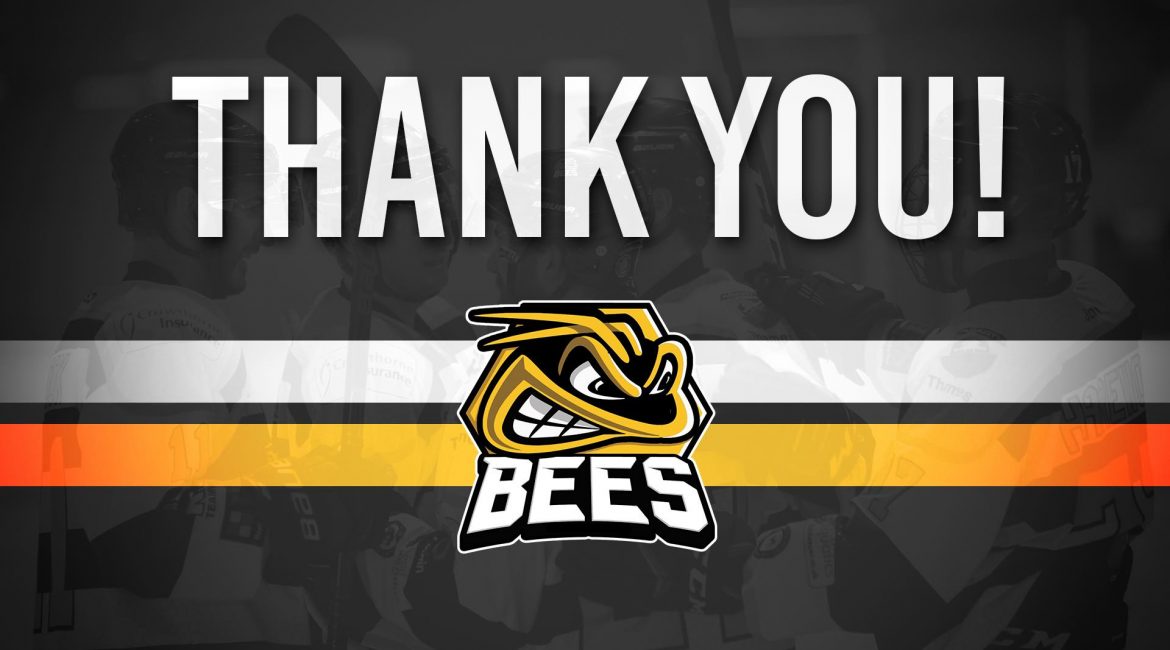 With the Spring Cup now complete there are numerous thanks the TSI World Bees Ice Hockey Club would like to extend.

Firstly, our thanks go to Slough Ice Arena and Everyone Active. It’s not the start we wanted, starting in our new home behind closed doors but thanks are extended to all the rink staff who’ve made this possible.

We’d like to say thank you to TSI World, our title partner and the power behind the stream. Since becoming title partner, TSI World have been tremendous supporters of the club and took on the running of what we’ve been told by numerous people has been the best stream in the league. Massive thanks to Andy and Nick for handling all the technical details of the stream.

While talking about the stream we can’t forget to mention Graham Bell, the voice of the stream who’s provided, clear, concise and unbiased commentary on all our home games. And Richard Brown who’s been the man behind the camera bringing the action to you at home.

We’d like to thank everyone who’s purchased a stream and also those who’ve sent messages and videos to be a part of the stream.

Obviously, with the series being played during a Covid pandemic we’d like to thank Berni for all her hard work ensuring everyone has been tested for matches and training sessions. It’s been a logistical challenge but with thanks to Berni for her hard work, support and guidance.

We’d also like to thank the BSC for their efforts in handling the transition to online for the 50/50 and shirt off the back competitions through the series. Becci Clark has put in a tremendous effort running these raffles and handling own and loan and enquiries from around the country and the world.

Thanks also go to David Spalton who’s managed the equipment throughout the series and been a massive part of the bench squad.

Finally, thank you to our amazing loyal supporters for adapting to this current way of following the Bees and for tuning in live every week to support the team.

Bees Head Coach Doug Sheppard said; “Obviously I didn’t see the huge amount of hard work going on behind the scenes on game nights but I’d like to extend thanks to all who’ve made this possible. It’s been great for the team to get back out on the ice after the longest lay off any of them have ever had. Thanks to TSI World who’ve made the Spring Cup possible for us.

“Thanks also to Stuart and Katie who’ve been at every game looking after the logistics but also who’ve spent a huge amount of time behind the scenes doing all the applications, form filling and admin to make sure that we could compete in this competition. And thanks to every member of the reduced gameday team for the vital roles they’ve all played in making this happen. ”

Bees Director Stuart Robinson added; “Thanks to Nick, Andy, Graham and Richard for producing a fantastic streaming product and to everyone who’s supported us from near and far watching the stream and buying tickets for 50/50 draws and shirt off the back draws.

“We’ve learned a lot over the last couple of months and we’re looking forward to being back on the ice soon, especially being able to welcome back supporters for the 21/22 season.”