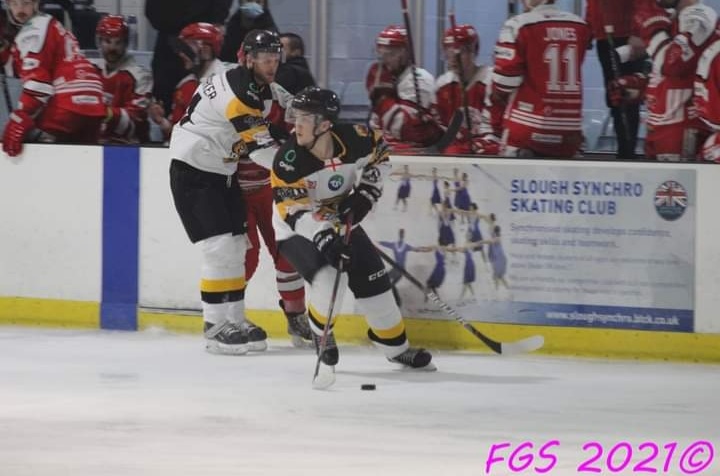 This week after the past weekend’s fixtures against the Telford Tigers and Peterborough Phantoms I had the chance to speak to Forward Christian Mohr about how he thinks the weekend went for the team and how it’s been having the opportunity to play for the Bees.

“I felt that the game against Peterborough should’ve gone our way as we had plenty of opportunities and personally felt that we were the better team, however as a whole weekend i felt that we came together as a team knowing that we were going to be short and did our best.”

FN: “What are some of the main things that may need to be worked on in order for us to get more points?”

“Chances are there we just need to put the puck in the back of the net.”

FN: “What are some of the positives you can take out of the weekend’s games?”

“As I said before we had a short bench but that didn’t stop us from working hard and never giving up and fighting till the end.”

FN: “How has it been for you playing for the Bees and getting to know everyone involved in the Bees?”

“At the start it was a weird feeling as I grew up watching the Bees and next thing I know I was putting the jersey over me, I’ve settled in nicely thanks to the boys making it easy for me.”

“The main difference that I only noticed is just that I have less time on the puck and it’s a much quicker paced game compared to NIHL 1 level.”

“Before seniors I wore the number 36 as it was the number I wore when I came back from Czech, but when I played up for Jets 54 was the blood jersey I wore so it kinda grew on me and plus it rhymes with my name.”

“Thank you for the support and have faith, results will come in the new year”

Why not come down to the Slough Ice Arena on the 27th December to see the Bees take on the Raiders IHC, you will not want to miss it!

Hope to see you all there loud and proud at the Slough Ice Arena on the 27th December cheering on the Bees and I’d like to wish you all a safe and Merry Christmas!