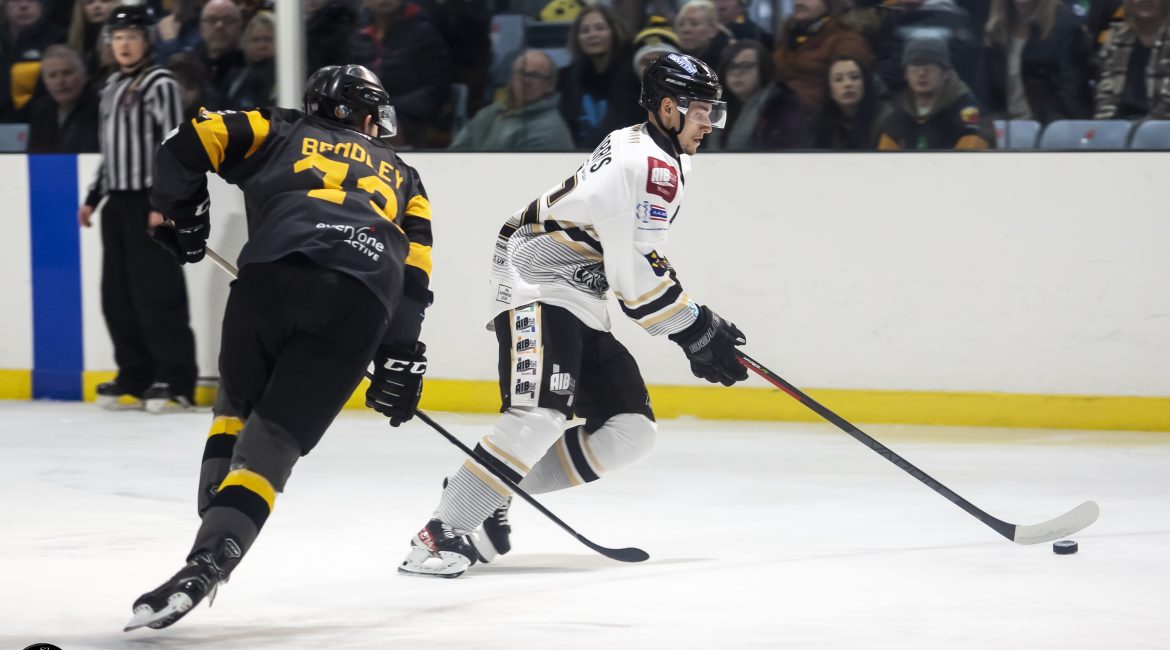 This week, after a 3 point weekend I have the opportunity to talk to Defensemen Ed Bradley about how he felt the weekend went, how he has felt his time at the Bees has been so far and experiences he has had from playing elsewhere in previous seasons.

“It was a great weekend. It’s always nice to pick up 3 points at a weekend and I think we were unfortunate to pick up the 4th. It was an unfortunate end to the Swindon game but we will always be satisfied to get a point off a team who top of the table. I thought the Peterborough game we started slow but as the game went on we found our legs. Especially being short numbered it shows what type of characters we have in the room to compete until the end. Personally I thought I had a good weekend. But I’m never satisfied and I always look for things to improve on going into the next set of games.”

FN: “Is there anything that may need to be improved on for our upcoming fixtures against Telford and Peterborough?”

“I thought we played our two most complete games of the season this weekend. I think the last period of the Swindon game we lost our game a bit and in the end cost us. We are always stressing that we are 2-1 maybe 3-2 type of team and that showed to a tee against Peterborough. Our challenge now is to consistently play this way every weekend. I believe if we do that and really focus on the defensive side of the game, we have the players and ability to score and start winning more games.”

FN: “What are the positives you can take out of the weekend?”

“I think the big one is we are getting that much closer to playing a full 60 minute the way we would like too. It is always nice to only give up 1 goal against as well. The more we can do this the better chance we have of winning. We have the ability to score 2+ goals every game so if we are only conceding one, maybe even two, we are going to start winning a lot more games.”

“I’m feeling great. We’ve just come off a big weekend and we are only looking to build on it. Telford are always a challenge but we are on home ice before Christmas and we will expect nothing less than two points. We will be going into Peterborough looking for another 2 points  and completing a four point weekend before everyone gets to enjoy some time off with family and friends for Christmas.”

FN: “How are the weekend’s experiences going to help us in our fixtures coming up this weekend?”

“I think the biggest thing in my opinion is we are slowly learning how to finish a game out and playing with a lead and not letting that change the way we are playing. I feel a couple of weekends ago we would have taken the lead and invited the pressure. Against Peterborough however I feel like we kept giving it to them, playing the game 200 feet away from our net and giving them no real chances at tying the game.”

FN: “How has it been being back and playing in the UK again?”

“I think the biggest thing for me is playing against some older, more experienced players. Playing in America/Canada against my aged players it was very much which team could score more goals. Now it is learning how to keep a one goal lead and not give the other team any chance at getting back. It is also just changing my game slightly to accommodate for players who may be slightly stronger on the puck than I am used to. More goals mentality.”

FN: “How has your time with the Bees been so far?”

“It’s been great. Before Covid I don’t think I would have expected to be back playing in England as soon as it has been. However, I’ve enjoyed every minute of it and I look forward to improving as the season moves on. The guys have been great and they’ve made the transition into the team very easy.”

FN: “How different is the gameplay in the UK to the other places you have played before?”

“I think playing in a younger game over in NA speed and skill was the focus point. Coming to England it is slightly different, especially playing against teams on Olympic size ice. It comes down to which team plays a smarter, more complete game. In NA playing on smaller ice it was much easier for you to get away with a mistake whereas here you are much more exposed and it’s why some players here have had such great careers off of being very intelligent hockey players.”

“We really do appreciate the support. I know it’s been a tough time over the last month or so for everyone but we look forward to building off this last weekend. We will be looking to give you plenty more wins to celebrate going into the new year and beyond and that starts with our game against Telford this Saturday! I look forward to seeing everyone there with their teddy bears and supporting a great cause!”

Why not come on down to the Slough Ice Arena on Saturday for our home game which will include our yearly Teddy Bear Toss and this year’s bears will be donated to the Alexander Devine Children’s Hospice Service? And while you’re there also see Edward Bradley in action!

Hope to see you all there on Saturday with your teddies for such a great cause and to all those taking the trip to Peterborough on Sunday safe travels as always!